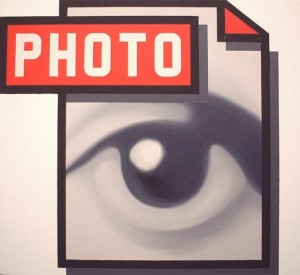 Always man created his tools to project on them a complete view of the world. The technologies’ meaning is the result of a modelling process done by the society who generates them. At the same moment a technology becomes a part of our life, it becomes also a new paradigm for the contemporary world.

In the last years we witnessed at the birth of some new “symbolic images”. We passed thorugh the pre-electric era with its machine’s metaphors, to the idea of the brain as an electronic system (today less than a stereotype). These new “symbolic images” are the consequence of the “Digital Revolution”.
The main ideas of the contemporaineity come from the PC world and Internet world – the hardware, the software, the database, the web, the interface, the hyper text, the links.
In this process the human being, his identity and his thoughts are assimilated to an amount of datas which are storable on a hard disk. And if you want they can be also shareable with the others throught high speed connection.

De Kerchove wrote: “Art is the opposite power which balances the explosive effects of the new technologies on the culture. Art is the metaphoric aspect of that technology used and criticized”.

Artists realize and develop the anthropological mutation signals. They work through the creation of new metaphors and new expression forms. According to our contemporary tech mutability Zanni interprets traditional genres like the landscape and the portrait
The contemporary landscape is the mediascape, our computer screen is the window to look at it. The horizon is pointed out from the cursor which through the links allow us to go beyond the infinite dimensions of the digital “elsewhere”.

Zanni paints on oil on canvas the icons and the windows, which every day we can see on our screens. They become the new “subject” of landscape. On the contrary the human being is portrayed through his mental identity, which became a fundamental part of the computer. The artist finds the unique contemporary portrait form. His updated version: e-mail, avatar, ftp login, nicknames, and emoticons. In “u _r your c” (www.e-sm.org) the reflected image of the man on his hard disk was the prevailing idea. Thanks to the continuous contact between the owner (the user) and his daily activities the informatics support becomes a faithful mirror.
“Show me your hard disk, and I will tell you who you are”…

Through a metonymic process man identifies himself with his “content”. It is exclusively a psychological effect.
With the “ICOn Portraits” (www.newnewportrait.com) the human figure comes out again, the human features are recalled through simple and clear graphic outlines. The physiognomy is outlined in a simple way following an opposite process: from the portrait form to the symbolic and metaphoric form of the sign.
But the meaning can always be different.
A computer icon is a simple symbol, a “face” which recalls a precise action; the underlying link is interchangeable, changeable and temporary. The appearance doesn’t coincide anymore with the identity, which becomes nomad, elusive and indefinite.
In a recent text Zanni writes, “The link is a reload of Fontana’s cut, it is the third dimension of the word. The word iconized itself and loses the intrinsic and deep value. It is not important the linked word, but the address where the word is linked.”

Every time the link gives a different meaning to the linked word, adding a new point to its defined horizon. As we know also an image can contain a link, and invite us to a new click. With the “ICOn Portraits” every single face can have this role.
Zanni’s portraits (they aren’t painted or drawn) are the result of a “programming” process which makes them interactive.
Unexpectedly this process changes when the artist decides to paint again. Besides Zanni’s digital production, on a parallel line, there are his big oil on canvas paintings. They represent the well known computer icons and software’s logos (Napster, Java, Linux, Jpg) but in this case the immobility which characterizes the pictures cancels the usual dragging possibility and interactivity icons and logos have on the desktop.