STOP AND GO – The Art of Animated Gifs
Curated by: Valentina Tanni and Saverio Verini 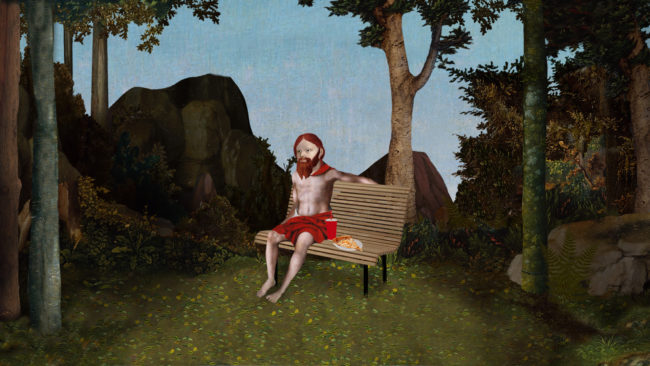 Light, attractive and hypnotic, animated GIFs are a genuine phenomenon of our time. The acronym GIF stands for Graphic ‎Interchange Format, a file format invented in 1987 that makes it possible to create and visualize a short sequence of moving images within a web browser. Very popular in the nineties, GIFs were then replaced by other graphic formats and by video, but continued to be used for artistic purposes because of their lightness, accessibility, flexibility and their close connection with the worlds of photography and cinema. In recent years, the emergence and growth of social networks have also resulted in a massive increase in the use of this medium.

The group exhibition STOP AND GO explores the artistic use of animated GIFs, presenting a broad and diversified panorama of the various approaches currently adopted by the international community. The show includes works by nine artists who are some of the most famous exponents of the genre: Bill Domonkos, Zack Dougherty, Roberto Fassone, Carla Gannis, Nika Ham, Lorna Mills, Okkult Motion Pictures, Chiara Passa and James Kerr (Scorpion Dagger).

Bill Domonkos uses archival images: old photographs animated by “special effects” that provide these vintage GIFs with an alienating kind of elegance and a disturbing poetic quality. Zack Dougherty, with his customized frames, brings a handcrafted artisanal dimension to the digital support; his works – photographic “vanitas” in motion – evoke a sense of death and decadence that conflicts with the vitality typical of the format. In a floating self-portrait, Roberto Fassone ironically presents himself as a homemade superhero, while Carla Gannis reinterprets The Garden of Earthly Delights by Hieronymus Bosch, enriching it with emojis and turning the painting into a kaleidoscopic universe of different signs, shapes and colors. In Lorna Mills’ work, dominated by a convulsive and hybrid imagination, the most pervasive images circulating online are assembled into frenetic and looping low-resolution collages. With their Giphoscopes, Okkult Motion Pictures reflects on the relationship between analogue and digital, stressing the connections between today’s web culture and early cinema. Chiara Passa presents a “sculpted” abstract GIF projected onto an uneven and bumpy surface, which gives the animation a three-dimensional spatial extension. James Kerr (Scorpion Dagger) draws on Flemish and Northern European Renaissance paintings, generating episodic micro-stories in which the characters – mostly religious figures – perform actions that are absolutely profane and grotesque. Finally, Nika Ham takes advantage of museum surveillance cameras to perform and record a series of small and repetitive actions. Her performances are then edited and converted in short videos and animated GIFs that spread on social networks like memes.

Realized in collaboration with smART – polo per l’arte, Rome, Italy
Supported by: the Ministry of Culture of the Republic of Slovenia, the Municipality of Ljubljana and Istituto Italiano di Cultura in Slovenia.