Nika Oblak & Primož Novak
And Now for Something Completely Different 10 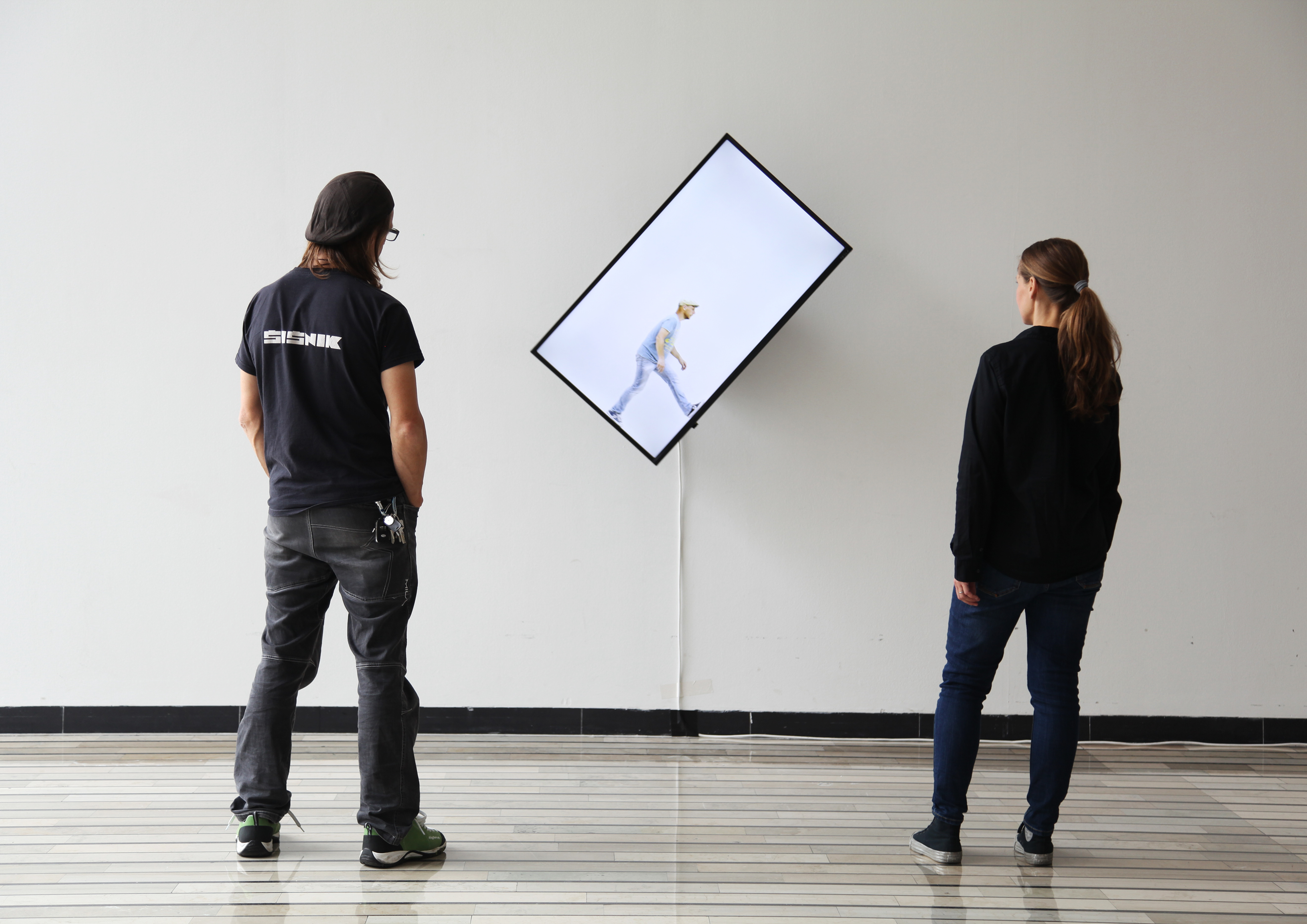 A man is trapped inside a screen, walking endlessly. His movements, careful and repetitive, generate a rhythmic, hypnotic sound. As he moves, the rectangular screen moves too, rotating like a big hamster wheel. Where Do We Come From? What Are We? Where Are We Going? is a kinetic video installation that playfully reflects on our contemporary condition, depicting humans in a perpetual and pointless engagement with technological devices. Our device screens are portals to other dimensions: they help us to learn and remember, to create, and even to connect with each other, but at the same time they are powerful traps. Locking our eyes and our attention, they can become prisons, preventing us to establish more profound and complex relationships with the world and the people around us. The more we use the machine, the more we tend to resemble it: like Charlie Chaplin in Modern Times, when he morphs into a human screwdriver, the man inside the LCD adapts to the screen’s movements and limitations, transforming himself into a gear of the mechanism. In a wider sense, the work can also be considered a reflection on progress itself: we are constantly moving but making no real advancement, forced into hectic activity with no clear purpose. The title chosen for the work, which is taken after Paul Gauguin’s iconic painting D’ou Venons Nous / Que Sommes Nous / Où Allons Nous (1897), reinforces this idea.

Nika Oblak & Primož Novak use technology as a self-reflection tool; they build complex machines capable of bridging the physical and the virtual, the digital and the mechanical, the natural and the artificial. Since 2003, they have produced a large number of projects, including performances, films, photography and installations, that together constitute an ongoing investigation on contemporary life, focusing on its most controversial aspects: the traps of consumerism, the oppressive structures of work and politics, the ambiguous relationship between reality and fiction, the hidden perils of an uncritical use of technologies. In The Box (2005), for example, we see the artists inside a TV screen, trying to find a way out by pushing and kicking the walls. Their actions infiltrate the physical world by bending the frame of the monitor, but they are never able to break out: the mass media system is a giant rubber wall that won’t let us escape its influence, no matter how hard we try. This idea of helplessly trying to establish a physical connection between what’s inside the screen and what’s outside, opening a breach, reminds us of The Last Nine Minutes (1977), a seminal performance by American artist Douglas Davis. Like many other artists of the period, Davis engaged in a profound reflection about the rising world of telecommunication, considering its profound impact on human consciousness and social relationships. Despite these similarities, however, Oblak & Novak’s work is very different, aesthetically and conceptually: humans today are not just exploring new tools of communication, they are completely fused with them, to the point of not being able to recognise their true impact. 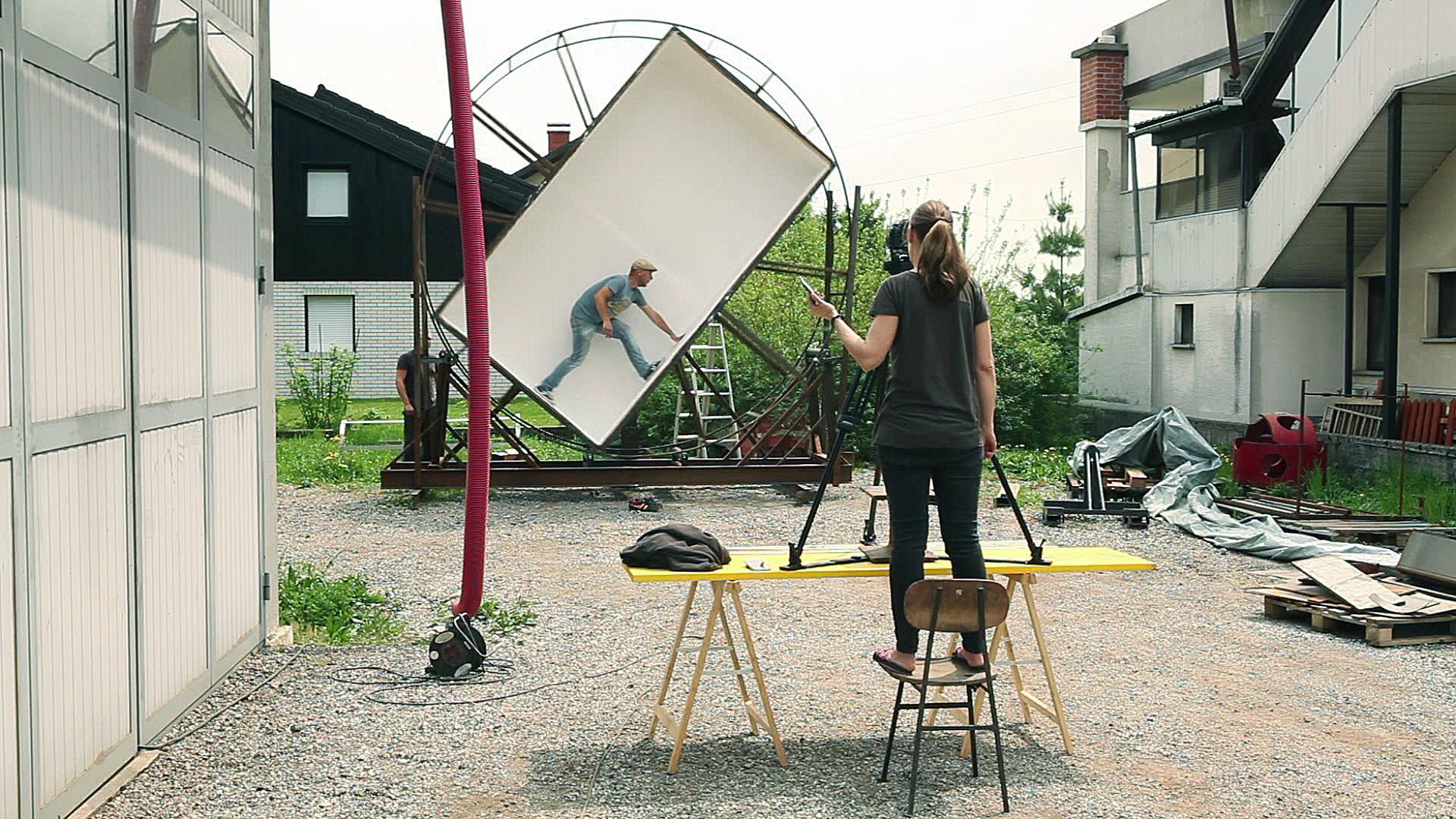 To describe this new situation, the artists build alternative machines, ironic devices capable of depicting in a very accurate way our daily life: a circle of recursive actions that are both entertaining and exhausting.  In Endless Column (2017), which contains a direct visual reference to the work of media art pioneer Nam June Paik but also pays homage to avant-garde sculptor Constantin Brancusi, the protagonist tries to balance several monitor on her head, in a circus-like performance. All of her attention is focused on the action of keeping everything in place, without losing a single piece. In a world saturated with media contents, and surrounded by devices that continuously demand our attention, we always feel challenged, chased, and in the process of missing something. Distracted by this impossible task of managing everything, we slowly turn into entertaining machine ourselves, becoming part of the global media spectacle.