Cat Graffam recreated “Judith Beheading Holofornes” by Caravaggio using Kid Pix Studio, a software released in 1995. Using the MOUSE. It was painful to watch at times, but amazing.

A film assembling music produced by mushrooms. Text from GPT3 and images from Stable Diffusion. By Eryk Salvaggio. Read more about it here.

“Corecore refers to an aesthetic that’s prevalent on TikTok under the hashtag “#corecore,” specifically within so-called NicheTok circles of NicheTokers, that plays on the -core suffix by making a “core” out of the collective consciousness of all “cores.”

Designer and engineer Arvind Sanjeev created Ghostwriter, a one-of-a-kind repurposed Brother typewriter that uses AI to chat with a person typing on the keyboard. The “ghost” inside the machine comes from OpenAI’s GPT-3, a large language model that powers ChatGPT. The effect resembles a phantom conversing through the machine.

I took apart my old typewriter and powered it using @OpenAI GPT-3.

“Me When I Was A Baby, also known as Whimsical Little Creature, refers to videos of the TikTok account MestreEnsinador1. It features videos of a flying white puppet wearing a green hat named Tiburcio. The name translates to “master teacher” in Portuguese, with the gnome puppet being referred to as a “forest being” by the TikToker in his comment sections. The videos often show the puppet flying and twirling, sometimes doing a little dance and sometimes undertaking mysterious rituals. Maestre Ensinador went viral in the fall of 2022 after a series of duets where people showed his videos to their younger siblings and tried to convince them that the puppet was them as a baby.”

“Tibúrcio is a strong gnome,” Jhonatan Oliveira says, once belonging to his late grandmother, “and that’s why I like it very much.” He remade the puppet’s body three years ago, before he began making the videos. His uncle appears with him in the first viral TikTok — he’s the one who took Tibúrcio out of the cruse, an earthenware vessel that Oliveira refers to as a buried treasure. “But, he is not a cash treasure, but a spiritual one,” he explains. “The inspiration to make the videos comes from God!” 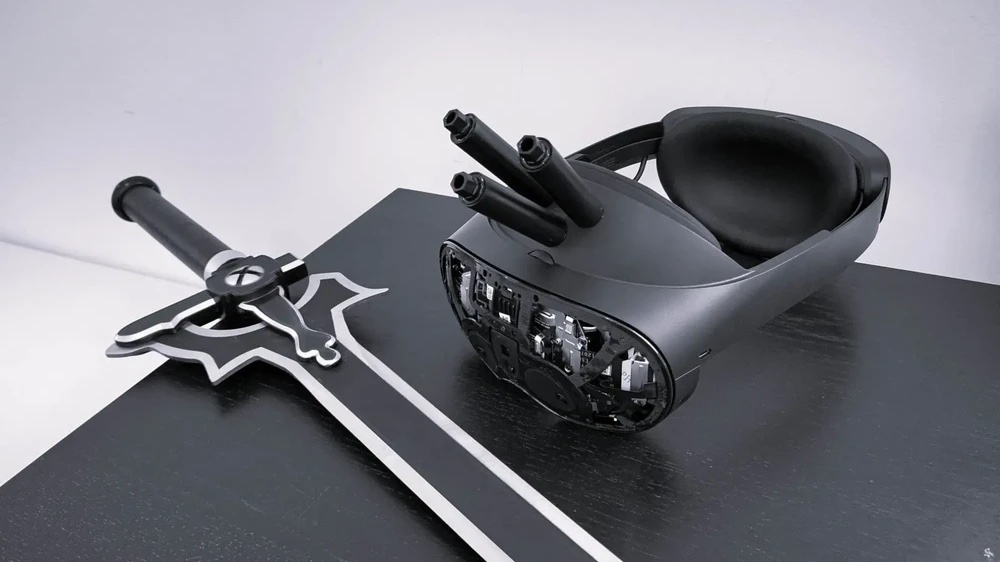 Palmer Luckey, the man who created the Oculus rift, made a VR Headset that kills the user If they die in the game.

“The idea of tying your real life to your virtual avatar has always fascinated me – you instantly raise the stakes to the maximum level and force people to fundamentally rethink how they interact with the virtual world and the players inside it.  Pumped up graphics might make a game look more real, but only the threat of serious consequences can make a game feel real to you and every other person in the game.  This is an area of videogame mechanics that has never been explored, despite the long history of real-world sports revolving around similar stakes.”

“Sand pours through his fingers as he tries to gather his flame together. His people. But it is dying, and they are dead. Extinguished.” 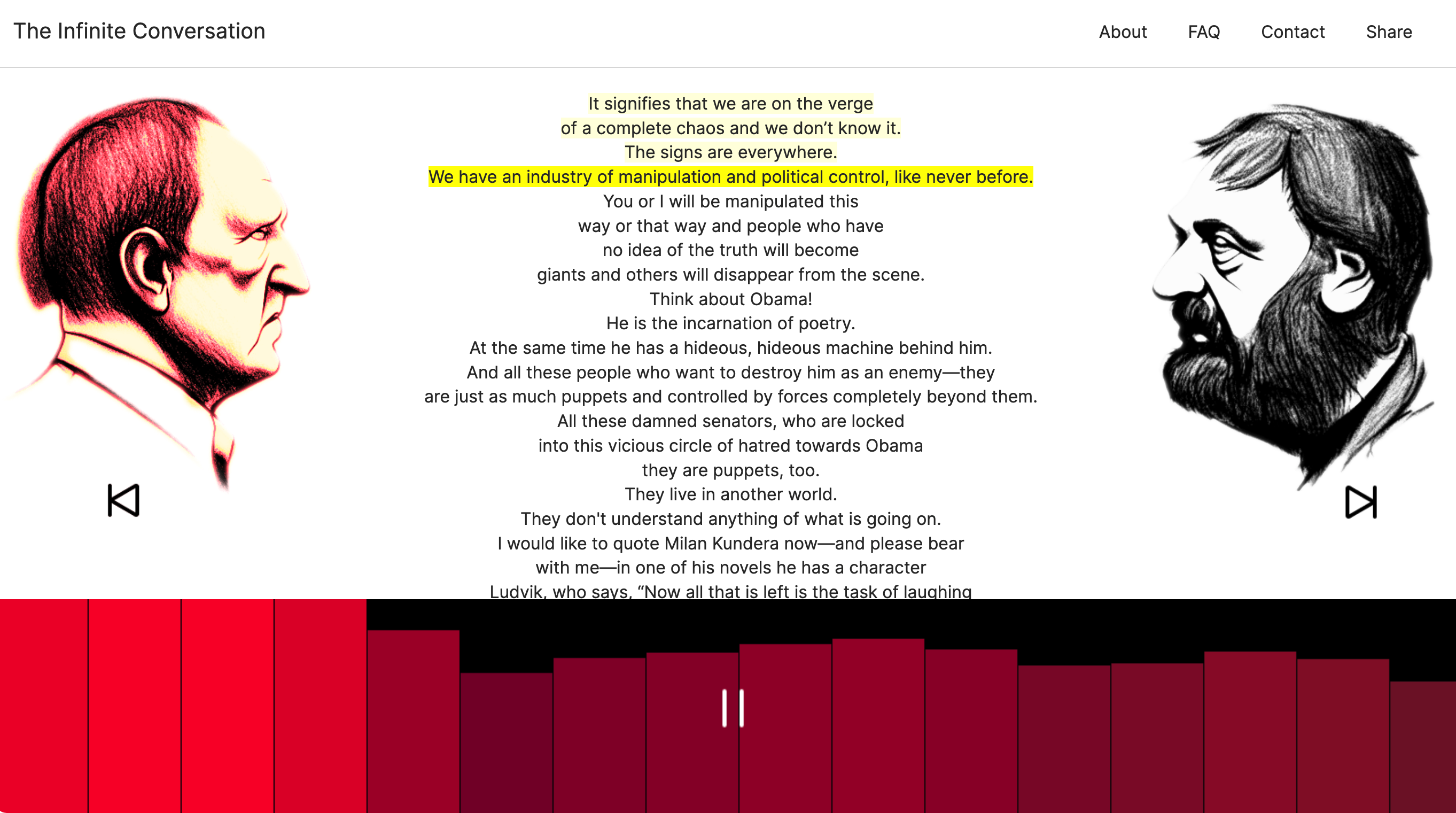 “An AI generated, never-ending discussion between Werner Herzog and Slavoj Žižek. Everything you hear is fully generated by a machine. The opinions and beliefs expressed do not represent anyone. They are the hallucinations of a slab of silicon.”

A single-episode analog horror video, Cornerfolk concerns a man who believes strange entities to be using his home as a sort of nexus when passing through dimensions. Fascinating. 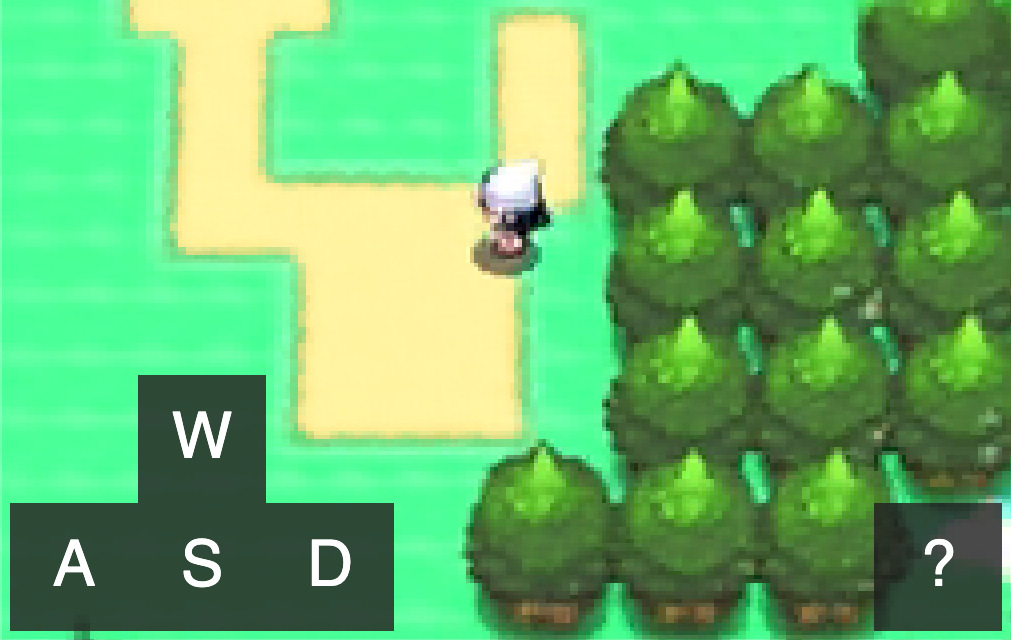 “I made a playable Pokémon overworld. It looks (mostly) like a normal video game, and you can try it in your web browser here. Although this looks like a video game, I did not write any game code. This program is actually a neural network mimicking a video game.”

“Kate Bellingham reports that an exciting new interconnected world – a world where every word ever written, every picture ever painted and ever film ever shot will be at our fingertips – is tantalisingly close. The information superhighway will be a high-capacity digital communication network, which in time could revolutionise the way we shop, socialise and work”. 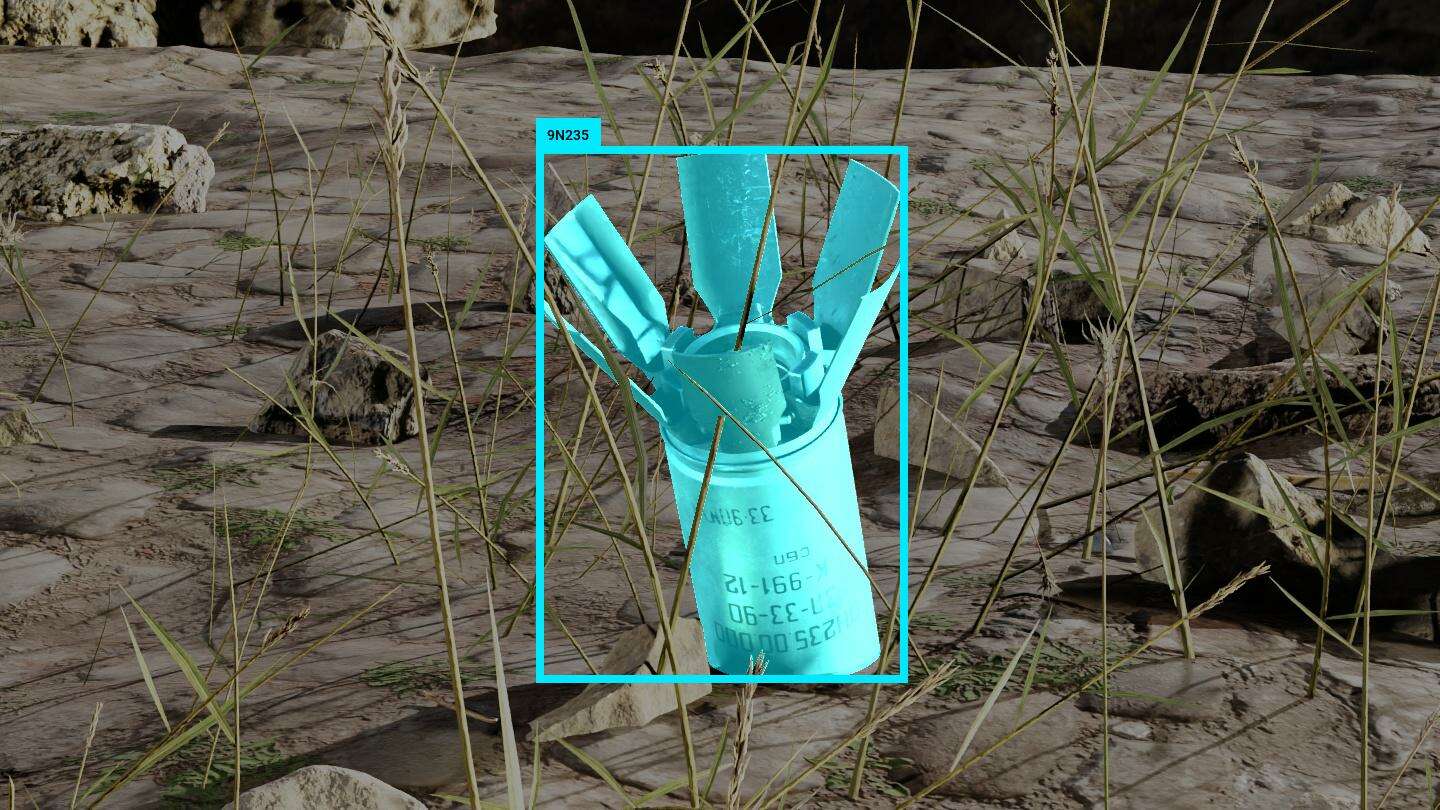 VFRAME is an organization that researches and develops state-of-the-art computer vision technologies for human rights research and conflict zone monitoring. It is developed and maintained by Adam Harvey in Berlin with contributions from Jules LaPlace, Josh Evans, and a growing list of collaborators.

During the winter/spring of 2022 VFRAME and T4T partnered to develop a 3D model of the 9N235 submunition that has frequently appeared in the war in Ukraine. This model is being used to create synthetic training data for object detection algorithms and high-accuracy 3D printed replicas for benchmarking purposes.

Artist Ian Cheng looks at the way that the work of psychiatrist Eric Berne changed the way that he thought about human personality when it came to creating the AI simulations that people his work. On Elephant:

“Obviously we take different paths, but Berne believed that everyone lives out a fairytale as a template script that they’ve cast themselves into with the help of their parents. Most people aren’t satisfied with the script that they’re unconsciously barreling down. It might be a mismatch: maybe your parents had old fashioned values; maybe the culture you grew up in radically shifted in your teens, which alters the relevance of your life script.”

“Spawning is building tools for artists ownership of their training data, allowing them to opt into or opt out of the training of large AI models, set permissions on how their style and likeness is used, and offer their own models to the public”.

by Holly Herndon and Matt Dryhurst

Dries Depoorter‘s “The Follower” project combines AI, open access cameras, and influencers to show behind the scenes of viral shots—without them knowing.

I don’t know how it’s possible that I didn’t come across this masterpiece before.
Passage a l’acte, by Martin Arnold (1993) “makes a simple breakfast scene from To Kill a Mockingbird look like a surrealist nightmare“.

“A 13-part television series covering aspects of the Internet in 1996 to introduce to a general audience. Called “Life on the Internet”, the series was hosted by Scott Simon, sponsored by Sun Microsystems, and covers the state of online life at the time”. 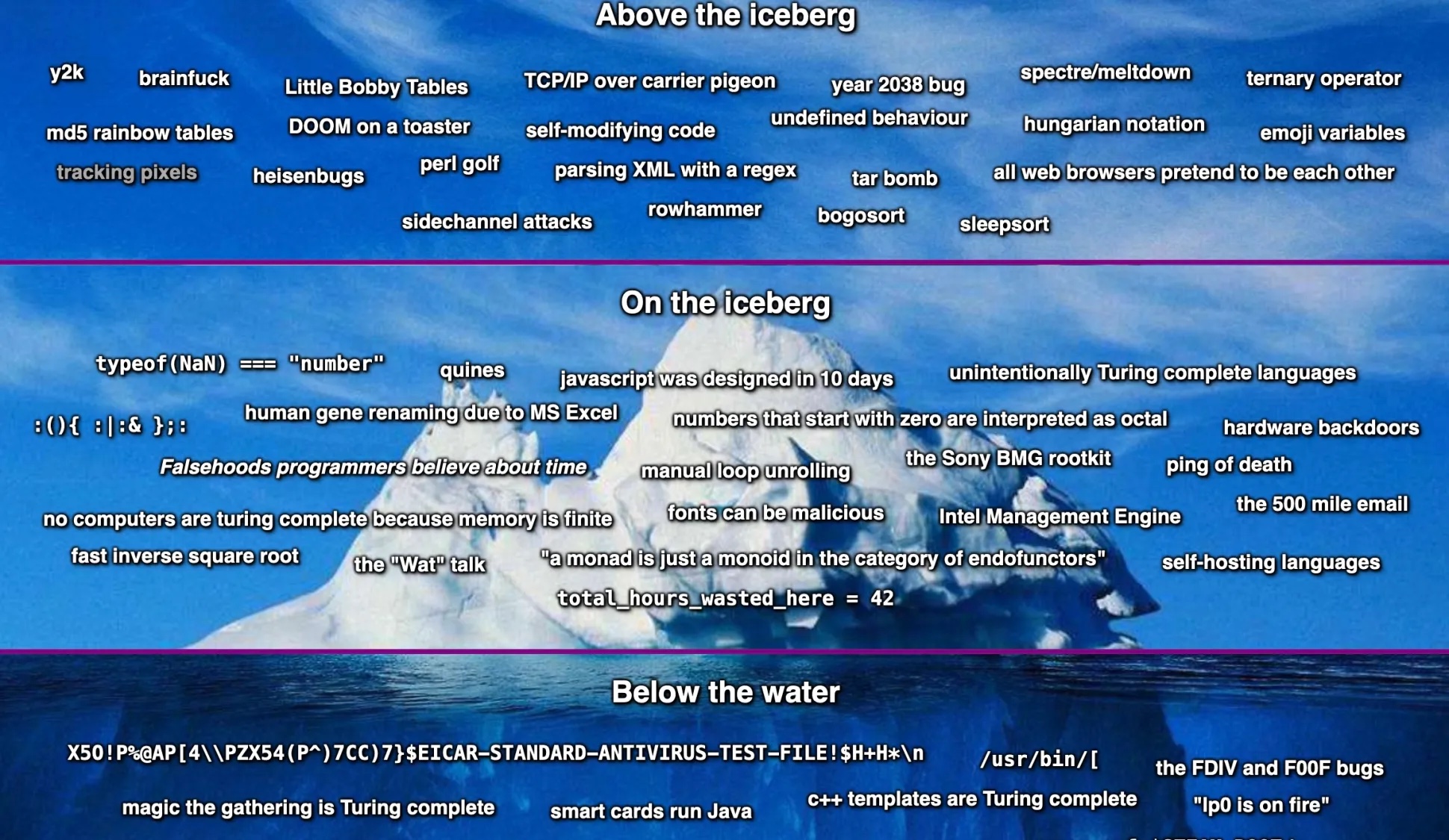 “this is not a hall of shame. the intent is to awaken you to many of the peculiarities and weirdness of computers. hopefully, after reading these articles, you will have learned a lot and will embrace chaos.”

“The Happiness Box theory posits that sufficiently advanced civilizations don’t swarm out into the universe, they implode into virtual worlds of their own making. If you could gain the ability to upload consciousness into simulated realities that are functionally indistinguishable from physical reality, why would you bother to climb into a physical spaceship to outwardly explore?”