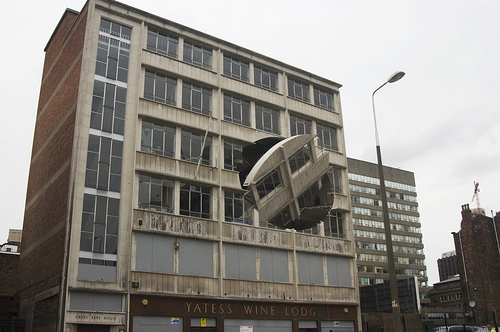 Turning the Place Over is Richard Wilson’s most radical intervention into architecture to date, turning a building in Liverpool’s city centre literally inside out. The artwork was a commission for the Liverpool 2008 Biennial.
Turning the Place Over consists of an 8 metres diameter ovoid cut from the façade of a building in Liverpool city centre and made to oscillate in three dimensions. The revolving façade rests on a specially designed giant rotator, usually used in the shipping and nuclear industries, and acts as a huge opening and closing ‘window’, offering recurrent glimpses of the interior during its constant cycle during daylight hours.